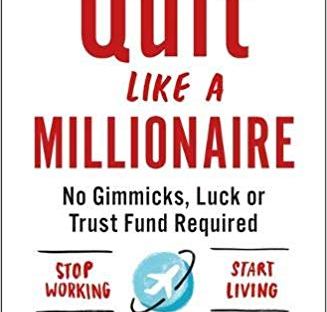 I’ve recently set up shop as a declutterer.  I’ve so far worked with two clients: my sister on her wardrobe and a good friend in her living room – in particular to organise and sort her children’s toys. When you spend a bit of time looking at what you have through someone else’s eyes it’s amazing what you realise you don’t need. I aim to be completely judgement- free and ask ‘what does this mean to you?, ‘what do you use it for and will you use it for in the future?’ rather than ‘why do you have this?’.

At the same time I’m reading a book we are about to publish at work called Quit Like a Millionaire (out on 19 Sept but available now in ebook). The book is written by Kristy Shen and Bruce Leung who were millionaires by the time they were in their early thirties and now travel the world clutter free. From having nothing as children they saved and worked hard in their twenties until they had a big deposit for a house, however suddenly the idea of putting all their hard cash into something that would still cost them a load of money in insurance, repairs, bills etc didn’t seem right to them. So they learnt how to invest and carried on renting. Then they decided to see the world working out carefully (Kristy is ‘all about the math’) that they could live on the same amount of money traveling as they could at home. Her top tip? If you’re a bit tight on budget go to South America or Thailand where your money goes a bit further.

The other nugget that bounced off the page to me was her thoughts on owning things. Kristy’s experience of growing up poor – I mean really poor, she spent her first few years in China where her family lived on the equivalent of 40 cents a day – meant that when she moved to Canada and had money she went a bit crazy with a love for designer handbags. She soon realised that the buzz of buying didn’t equal the buzz of owning so she was buying more and more but the buzz was lessening each time. She believes people are happier if they spend available cash on experiences rather than things.

For me, that’s quite a shift of mindset. I’ve never particularly wanted to travel and have always believed that owning a house/flat, surrounding myself with nice things and creating an enjoyable place to relax in is more satisfying than a holiday. That I’m more rewarded by an afternoon painting a nest of tables that I’ll look at every day than a day trip to the seaside. But Kristy’s way of thinking has made me wonder if I need a bit of both in my life. We just got back from a week in the south of France which was wonderful but not quite long enough to wind down and switch off as much I as would have liked. So I’m wondering now if a few day trips and a weekend away and off the internet would be more beneficial than the days at home of which I am usually so protective to look after myself.

If you’d like to work with me on a decluttering project please get in touch through the contact form.

Quit Like a Millionaire by Kristy Shen and Bruce Leung is out now in ebook and will be published in paperback on 19th September.