The bathroom is the one room in the house that is pretty much how we want it. Sure, I might not have chosen a bathroom suite of this style and I’d prefer a mixer tap on the sink but I love the bath and the  yellow floor and the tiling is in very decent nick. I even loved the (now obsolete) Ikea green cabinet the previous owners had so much that my husband tracked one down for us on ebay!

I wanted to add a bit of my personality to the space though and had become obsessed with wallpaper murals. At an interiors workshop with Lisa Dawson and Dee Campling a few years ago I remember Lisa saying wall murals were going to be big. I didn’t believe her at the time!

I am a great lover of nature. I’ve always liked gardening and animals – show me a zoo or a butterfly house and I am there (for a moment I thought I’d like work in a zoo before I realised it would mean being outdoors in winter and I wouldn’t like that). I am drawn to botanical prints in fabrics both for clothing and the house.

I’ve been toying with this mural for the living room eventually:

So I knew nature was the way I wanted to go. I remembered a beautiful the bluebell wood I visited with friends a couple of years ago. It was so peaceful; my eyes couldn’t get enough of the vivid purple/blue of the flowers carpeting the forest floor. I wanted to recapture that feeling so searched bluebell woods and after some debate between these two pictures from Photowall… 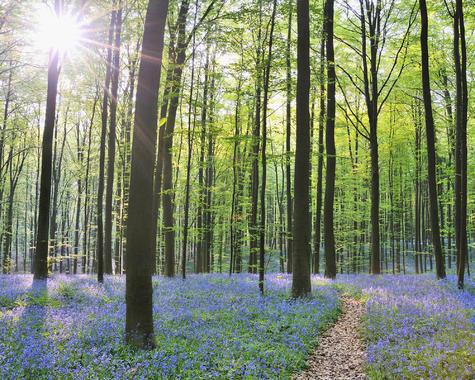 I chose the bottom one because I prefered the shade of the bluebells and they filled more of the surface area of the print.

Measuring is really important if you’re going to purchase a wall mural but I found the instructions on PhotoWall easy to follow. It arrived in two days! And that was at the height of lockdown so I was very impressed.

Before: Not so bad. We hadn’t got the right storage and I wanted to change the grey wall but otherwise we were quite happy with the bathroom. I gave it a thorough clean with a steam cleaner first and the floor came up beautifully.

This was the first time I had wallpapered. The mural is a paste-the-wall type which made it much easier but it was still really stressful! 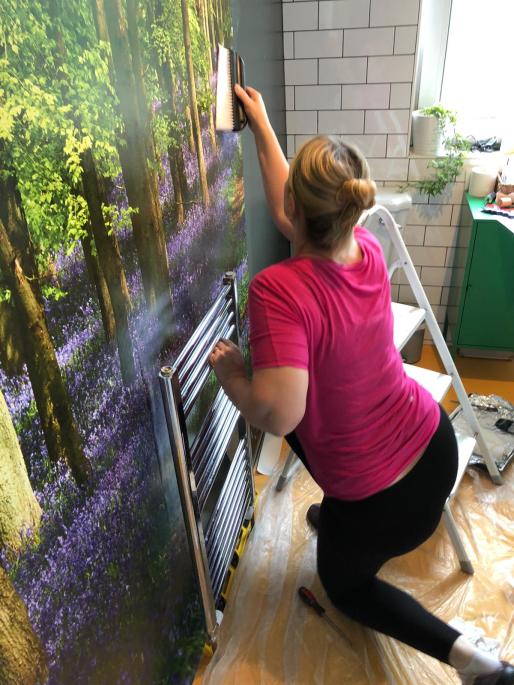 We bought a seam roller which I thought was going to be a waste of money but it is an amazing little tool so I’d recommend one. You run it over the joins and they magically disappear! 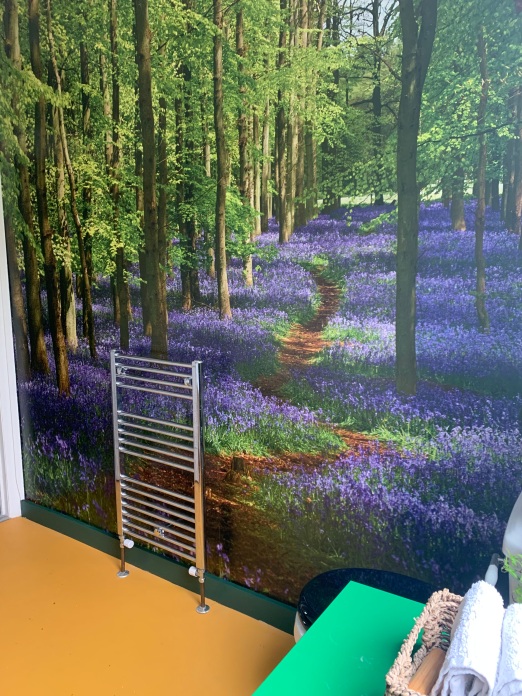 I chose the standard finish which has a sheen to the surface. I thought that might be more breathable and better for a damp environment like a bathroom. It does make it difficult to photograph though! 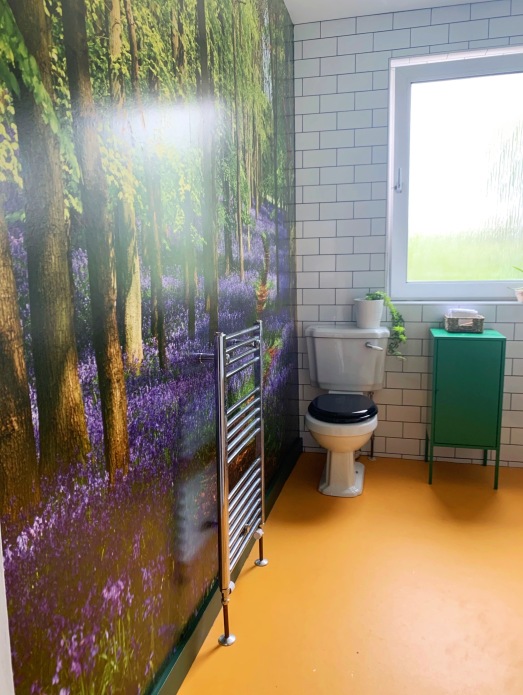 We unscrewed the towel radiator from the wall to make a neat job behind it. Someone said it looks like a gate to the path which was completely unintentional but from now on I’m going to claim I planned it.

Finishing touches: a yellow plant pot on the window sill and macrame plant hanger, which I made from a kit from Cocoon&Me, to pick up the colour from the floor. 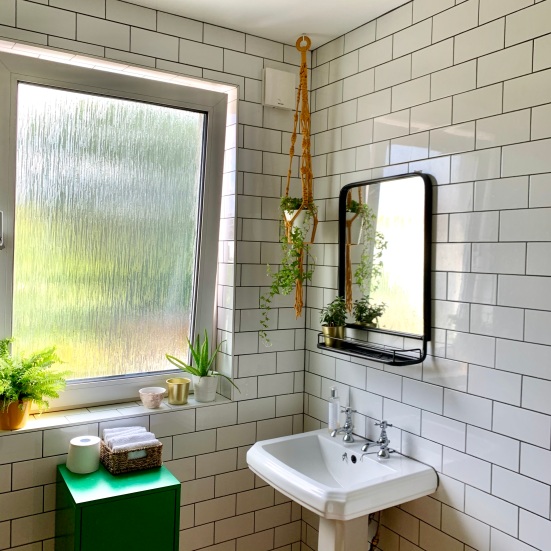 Not forgetting the towels! The colour of ours had been chosen for our previous bathroom and had looked fine with the grey wall but didn’t go now. They were in good condition so I had the brainwave to machine dye them with Dylon and am delighted with the result.

For what could have been
When our builder revealed this chimney breast I wasn’t really that bothered but it’s come up really nicely. I can hardly move my arms tonight because I have been scrubbing and scraping and washing it all afternoon! Next it needs a couple of coats of PVA glue to seal it and because the inside is too damaged it will be boarded out and perhaps tiled. #fixerupper #storyofmyhome #chimneybreast #brickfireplace #kitchenrenovation #myrenostory #houserenovation #renovations #houserenovations #renovating #homerenovations #renovationideas #renovationproject #homereno #housereno #renovationlife #mydailyrenovation #homeupdates #homeimprovements #homerenovationideas #renovatedhome
These doors have been a long time coming. I actually can’t believe they are here!
I’m missing the old dining room, crappy kitchen and awful conservatory today. We have slugs in the living room - also our kitchen and food store 😷, no heating, no lights upstairs and the whole house is filthy with dust. But the good news is the plasterers have finished and the doors and windows are coming three days early!
Sometimes I just buy fabric, make something immediately, take a photo the next day and share it on here. Other times it takes over a year to get through the process. This @sewoveritlondon Libby shirt definitely falls in the latter category! I made it during lockdown last year with one of their lunchtime sewalongs but took nine months to make the button holes and sew the buttons on. And I think I’ve had the fabric in my stash for over five years!
Follow Hannah Cowie on WordPress.com